Time On Target 2: At the Sharp End

Years ago, a couple of guys created an Advanced Squad Leader product called Time On Target. The first issue was a collection of themed scenarios set during the Battle of the Bulge and were released to coincide with the 50th anniversary of the battle. They attracted pretty universal acclaim for the obvious research and dedication that went into them. At the time they were amongst the best ASL scenarios released.

Then about a year or so later, Time on Target 2 was released. This dealt with actions in April 1945 that occurred in Northern Germany involving the British 21st Army Group and the opposing Germans. Unlike most late war situations which usually end up resembling a heavy metal car lot, this featured a huge range of actions drawing heavily from John Russell's No Triumphant Procession: The Forgotten Battles of April 1945.

Because they fell outside the usual US-centric Western Front ASL view, this scenario pack appealed greatly. However obtaining the book upon which the scenarios were based became an issue unto itself. I did however find a copy of the 1945 Story of the 79th Armoured Division which helped in some regard. 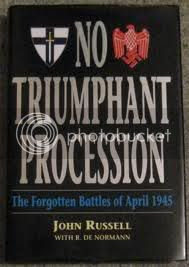