Games over the weekend

Played two games over the weekend, plus got another three turns done in my VASL league game.. The first game was FB12 The Black Ravens are flying (awesome scenario title) with me as the German/Hungarian vs Aaron C's Soviets. This is just a freaking cool situation and design. Definitely a keeper. Reminds me a little of MP11 Vulcan's Forge in the potential for melee shenanigans on turn 1. We ended up with a tank each trying to share the same orchard hex in setup, hilarious. Lost but who cares, this was my first game from FB and a bit of prep for Cancon.

The second game was J129 Mountain Hunters from Journal 9 versus John Knowles. Peter Struif one of the designers watched our game over a couple of sessions, and I hope we didn't stun him with the mediocrity of our play, particularly in the second session where we were at an impasse in terms of poor DRs. In the end, it came down to the Stug clearing the way while John's commissars did more damage to his troops than I did. The soviet guns up on the rearmost ridge were very frightening, especially after my 60mm Mtr permanently xed itself during repairs on turn 2. All in all, a very good scenario, belying its ROAR record. Sure I achieved all the VC options, but it was really tight between getting all three and only getting one.

Confusion Reigns is still going strong, I put a good turn's delay on the US 9-2 stack of doom, but that was only temporary as they are back now and making me keep my head down. In my PBeM games, J148 Last Minute War has been notable by the Slovakian ACs bogging every single turn. It's now getting into the real mid game and is pretty fraught as both sides are still very much intact. SP184 Cornered Beasts has been notable for the Panzer III marksmanship in the first two turns, but everything else has been a little lacklustre although Soviet inf fire has been effective. Finally J147 Into the Grinding Mill has been exactly that with the Japanese Banzaiing into the midst of the defenses but at some risk and I am expecting a significant riposte from Chinese fire now....

With 5 games at Cancon to look forward to I think it might be my fastest ASL playing start to a year in two decades.
Posted by Peter at 12:33 AM No comments:

The latest ASL fix arrived on Wednesday from Fine Games (www.finegames.com) just 7 days after the order was processed. I had ordered (despite my misgivings at Critical Hit's record) three major HASL products: Kharkov, Kursk (Ponryi) and Tyrants Lair 2 (Berlin) as well as two older CH products: Red Christmas and Spanish Fury. Added to this that CH's Omaha West had arrived a couple of days prior and I was inundated with major HASL nirvana.

Sadly, Kharkov arrived without the mapsheet and Red Christmas was missing the Scenario card for 3b. My frustration was pretty intense at this pointg because mapsheets and overlays are almost impossible to do without. Edoardo (ASRomafan from Gamesquad) put me in touch with Ray Tapio from CH directly and this morning I have received a very gracious and prompt response sorting out the issue to my satisfaction. Can't ask more than that for resolution of a customer service issue.

I intend to write up a few initial impressions on the products that have arrived complete and will follow up on the others once I have all the replacement parts. 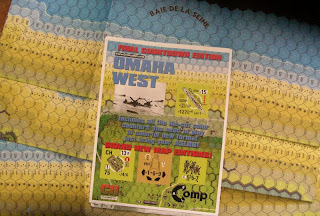 Seriously this is one pretty major work. 3 standard HASL maps, 16 scenarios, a large amount of set up charts and a duplicated set of 2.5 fullsize countersheets plus a 12 page booklet of rules. Landed cost for me: approx AUD$91.


Normally I find the inclusion of duplicate counter sheets a gimmick rather than a selling point but in the case of Omaha west, the inclusion is a definite plus as tehre will be a need for the additional landing craft and the HASL specific SW like banagalore torpedos and the like. The quality of the countersheets, while not up to the level of BFP or modern MMP in terms of diecutting, is certainly a vast improvement from that previously available. I don't particularly like the reduced size turrret speed notation as it does not easily meet the eye but that's a quibble. 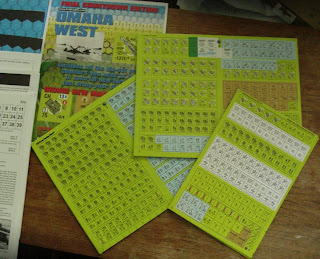 The scenarios don't all focus on the beach assault itself, with five of the sixteen included focused on actions in the hinterland proper, while several use the whole map depth. Apart from the 39 turn monster Black Day for the 116 which effectively is the CG for this module, the scenarios cover a great range in overall size, with the first three scenarios serving nicely as introductions to the mapsheets.


The map is the real star of this. CH got it absolutely right in printing the beach defensive works on the mapsheet as the amount of fortification counters required would have been obscene. It's a very impressive sight when laid out. It has meant that my Gaming table plans have been revised. 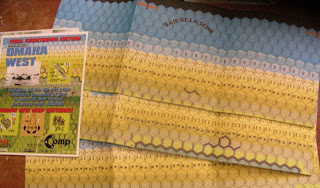 All in all very impressed. It's a module that were it not for Joe Balkoski's books and Saving Private Ryan, I would not have been interested in. I doubt I will be buying the companion Omaha East unless the price point reverts to sensible levels as $USD199.00 + P&H is obscene.

Did I Really Buy All This Stuff?

Since I re-entered the realm of the semi regular ASL player in August 2012, I also rejoined the ranks of the ASL purchaser. I don't consider myself an ASL completist by any stretch, as the offerings of Wild Bill and Black SS counters leave me cold, but products with decent overlays and maps do tend to get my attention and there are some manufacturers of ASL gear I do buy as a matter of course

It's only when I actually look at this list in total that I realise just how much I spent in the last 6 months. But then again, I pretty much have negligible other interests that draw on my disposable income at all these days.

Of the above, MMP, LFT and the Other Publisher scenario packs were either catchups or form part of my 100% guaranteed purchase items. The Grail items were opportunities I couldn't resist and yes I paid collector market prices for them. That's the reality of missing out on them the first time around.

Items bolded will be loked at in a little more detail and in the case of a couple, I will be taking pictures.
Posted by Peter at 10:49 PM 2 comments:

I had hoped to post much earlier this month, but the current Australian Heatwave cioupled with real life work commitments have meant I haven't had the energy or indeed the time to do much other than play ASL in what free time I have had.

A lot of ASL goodness has arrived in the last two weeks, some of it outstanding, others being fatally flawed, but more on that over the weekend.

In two weeks time I will be at CanCon, playing ASL in canberra for the first time. I will remember to take photos. In preparation for one of the rounds, the Cleavinator will be playing me in a game of FB12 on the weekend. As I don't yet own Festung Budapest (trust me, I already regret placing other ASL purchases ahead of this) I am looking forward to breaking my FB duck.

And I now own Journals 3 and 6, so I have knocked off a sizable proportion of my Holy Grails already.

A lot to review from now on, even if only as an overview.

Starting as I mean to continue

Is It January 6 already?

J125 Everything is Lost, 1 January


The ASL new year started with not a bang but a whimper as I was out thought, out shot and out foxed in a game of J125 Everything is Lost with John Knowles. Suffice it to say, that the game was over after the opening salvo from the 88L AA gun that took out both ISU 152s, KIAed the 628/FT that had threatened it and rubbled the hex to boot.  Ugly, just ugly. Thoughts on this scenario later, but I have my suspicions that this one is too straitjacketed to be enjoyable for the attacker...

Ivan Kent and I rocked up to the Paddo Bears meeting to play the revised version of GNSP from Doomed Battalions. Given that it was the first F2F game of the year for both of us, and it featured some weird and wacky Danish equipment, I was impressed to discover that we went all the way to the final player turn in just over 3.5 hours, once you took into account the lunch break and late start.
I thought I had overemphasised the weighting of my defensive set up in this, and i didn't really make the most of the two major AT assets I had, but the Steeple mounted HMG was the cornerstone of my defence throughoiut the game, along with the 8-0 that battlehardened to a wounded heroic 8-1.

Ivan ran out of VPs trying to cross the bridge, with the HMG chewing up anything that moved into the open. When it came to any shot with FFMO, FFNAM and -1 ldr directed, I usually rolled more KIAs in the attack than units on the receiving end. I'll look at this game in depth over the next week.

This is now in full swing, 2 Ladder PBeM games underway, my second game of the year vs John Knowles due to start later today, and I'm in the scenario/side determination phase for both the VASLeague and the eASLeague.

To top it all off, I'm in the last stages of working through my CanCon attendance so January may be a very busy month both at work and play.