John Knowles and I sat down this afternoon to play J126 Ugly Faces from Journal Nine, a Chas Argent design that initially seemed to get some bad press and some fairly rough treatment for the Germans.

The omens were not propitious as I knocked over my best coffee mug onto the tiled floor before the game even started. Cacophonix may even have struck up a dirge about Toutatis and the sky falling around that time.

John took the Germans with balance (and that additional 20mm FP is damn useful) and we started to play: 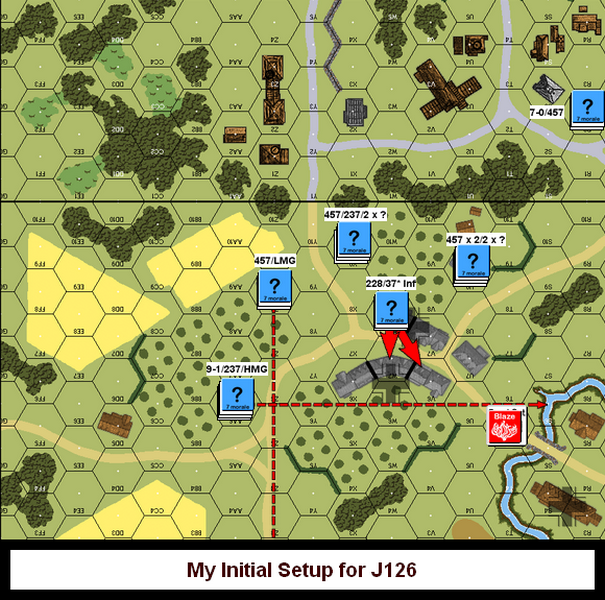 Now I will claim that 8 months away from playing ASL stultified my normal defensive brilliance, but we all know that to be an outright falsehood. I set up the 37* INF far too far forward and had nothing really to stop an end run by the Sdkfz 222s on the right.

And so it proved..because I did absolutely nothing on German Turn 1, apart from stunning the Bathtub. I lost the two squads in U9 because I let them get caught in CC rather than leaving one concealed and/or vol breaking the other and john ambushed me. The only shots I was taking were either decent TH shots or 8+ FP DF or 4FP resids, all the DRs tending to match my MCs and PTCs which were averaging 7.5+ already. Not good when you are French.

So after Turn 1 I was in a power of trouble. Turn two was just annoyingly vicious as I was flanked, broken and routed as well as dead from FTR. The 222s were already in the backfield up by the stone wall on the Y hexrow crossroads. 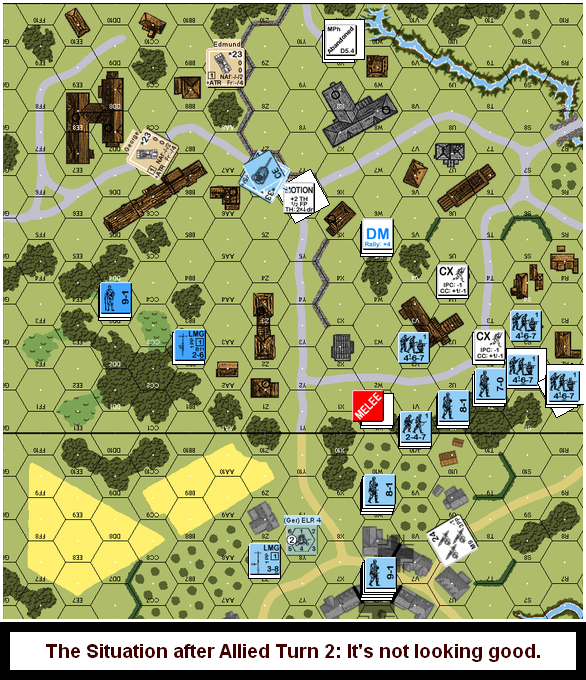 Turn Three was just bad, and I had a chance to rectify it , but I ended up with 14/60 non-wind change DRs being 9+ versus John's 14/50 of 4 or less. There was an opportunity to cause some havoc as Johnhad not safeguarded the ongoing Melee in W1 which if I had surviuved would have allowed me to threaten the three multi-hex buildings in the south. Alas it was not to be, and the final straw was the last possible 4 up 1 snakes vs one of my 18pdrs that took out the truck, the crew, the gun and a 237 hs that was to assist in bringing the gun into action.

An Ugly game of Ugly Faces , but the scenario deserves a lot more respect than it gets. I won't be counting this game as truly representative as the dice were extreme on both sides. 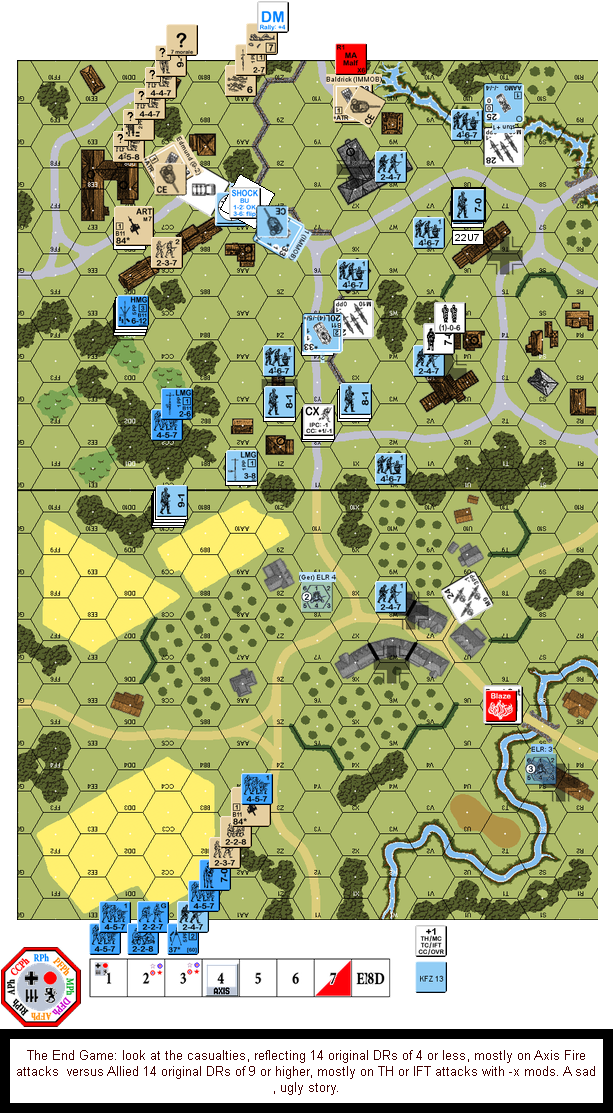 So it didn't even get past the CC phase of Allied Turn 3. Says it all really. Still want to play this again though as either side.
Posted by Peter at 11:19 PM No comments:

While I was unable to access this blog, a small but significant anniversary occurred. Although this (Blogger) iteration of the blog is relatively recent, my first ASL related post was back in September 2004, a capsule review of a pretty decent book and ASL Third Party Publisher .

So I am now in the 10th year of posting, even if it's only an average of 1 post per month. The other anniversary is that this particular site started in October 2009 and 103 new posts have been added in that time.

The other achievement is that we've now reached our 10000th page view, the last 4000 of which came in the last year.

Just as an aside and because I have often promised pretty pictures, here's a graphic of where my small but valued group of blog readers are located (it';s the most recent 100 visitors):

Some celebration is in order and what better way to celebrate than to post about actually playing ASL?

Once all these games get underway, I expect to be playing around 2 sessions per day for the three days I am not working each week.  That doesn't even include the ritual loss to the Cleavinator that occurs every three months.

It's good to be back, but even better to be able to write about actual ASL play.

Pete
Posted by Peter at 9:19 PM No comments:

It's good to be back: AP17 Valley of Death

It's already looking like I have a taker for the XV series playthrough, just waiting for schedule confirmation. But not only have  I started two more games, I'm able to restart a game with Joern Helms: AP 17 The Valley of Death.

We managed to get through the first Italian turn initially before real-life difficulties caused us both to drop out of sight for a while, but here's the situation as it stands:

My latest project on Gamesquad

The theme is not so much Eastern Front, or indeed by publisher but is based on playing through
the designs of a single individual, in this case, Xavier Vitry of Le Franc Tireur.

The idea:
The scenarios (with Balance if both players are evenly matched) :

Of these 10 scenarios, I have played all those published in the Journal except J093. I am currently about to start a game of FTC 196 as the Germans vs Blind Sniper.
Posted by Peter at 10:59 PM No comments:

Friendly Fire Pack 8 has only been out a few weeks and already the scuttlebutt is that this pack could be one of the best they have produced. Seriously high praise indeed after the showing of Friendly Fire packs 6 and 7.

I didn't get to play any of these previously at ASLOK unlike many, so Dryga Larpengar is the first chance I've had to see the scenarios for myself. So far so good. Small, vicious and with a tasty wee hook to the scenario that requires reading the aftermath to understand the impact of the VCs in the game.

If this is the weakest of all the scenarios in the pack, then Friendly Fire pack 8 may well go down as one of the strongest ever produced, rivalling the Windy City Wargamers' offering. If one of the best ASL players was heard to say something along the lines of Friendly Fire are good enough that he would be happy to dice for sides sight unseen, then you just know there's not much on offer that approaches that, let alone coming close.

So all in all a very good first weekend back on ASL active duty. All I need to do now is restart those few PBeM games that were so cruelly interrupted in February. Emails are being drafted now.

Pete
Posted by Peter at 6:02 PM No comments:

I'm back! Sans a working storage drive for now (just using the SSD as a temp) as I ended up losing the 1TB storage drive as I had feared.

VASL is installed, only 1 monitor up and running so far, but the prognosis is good. Hopefully will be able to start playing from tomorrow morning onwards.
Posted by Peter at 9:25 PM No comments:

This coming Friday morning will see the arrival of the newly refurbished computer. Eight months of exile in tablet hell will come to an end with a vengeance. All caused, not by a power surge as I had thought and dreaded due to the cost of replacing the Solid State Drive, the graphics card and power supply, but by a single failure in a $5 SATA cable connected to the OS drive. So much of my exile was avoidable if I had any kind of computer clue. But then the cable failure was probably caused by me opening the case the last time anyway.

The good news is indeed good, no data loss.

So what is my ASL schedule going to look like? Well, as I only work Mon-Thurs, I intend to get back on the horse that is VASL as soon as possible. I intend not to focus only on pre-arranged games as I was wont to do, but from now on I will have a short list of on call scenarios with associated defensive setups for those times when an ad-hoc game is called for.

I'm hoping to at least start one live VASL game most Thursday evenings Australian time,  as that will mesh well with the North American and Asia Pacific community. The three day weekend also means I will be able to play some of the GB/Euro ASL active players as waking up at 6am to play equates to a 2 hour sleeping for me.

All in all, I am looking at hopefully playing three completed games on average per weekend, and that will still give me the two days per month I need for attending the war games clubs for miniatures. I do know that I am seriously looking forward to being able to post screen grabs and photos on this blog rather than the walls of text I have been restricted to.

Steve Linton from Canberra very kindly sent me two scenario packs from the Break Contact series. Now PTO is very much an acquired taste of mine, if only recently, so the opportunity to look at some new scenarios was always welcome. There are some big scenarios in the two packs I have, but thankfully the new multi-monitor set up makes these doable now. A notable design in the latest pack features the LFT I beach landing board so it will almost certainly make the playlist. I just have to find some one also keen on doing seaborne assaults and evacuations.

All in all, lots to look forward to and lots still to do.
Posted by Peter at 11:14 AM No comments:

The Time is Rapidly Approaching...

...When I will be able to rejoin the active ASL online community:


Still have to buy a decent headset/mic combo and sort out the archived data, but all that costs is time rather than $$$ which has been the bottleneck until now.

Time to look at an updated playlist and then post a few challenges, particularly for my UK and Euro ASL brethren as the time zone difference is much less of a hindrance with a three day weekend.

It has been a very long and frustrating seven-and-a-half months, in which time I have truly come to loathe tablets and the iPad as the only conduits to the Internet available for me. This is why the current plan is to have a second PC dedicated to gaming ready and available by the end of the year,
just in case.