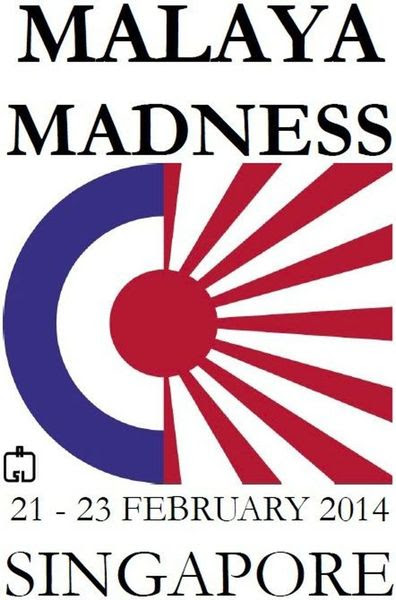 This is my primary goal for the first half of 2014: attending the inaugural Asia-Pacific ASL tourney in Singapore. Budget wise it is going to be very tight, but hopefully the OT due me will take care of that.

It will have been almost 40 years since I was last in Singapore for more than a stopover at the airport, so I'm effectively going there for the first time. As always, attending an ASL tourney is not so much about the results as it is meeting and playing other ASL aficionados.

I'm going to be bringing a travel kit of Brits, Japanese, Basic Soviets , Germans and US army along with core system counters. Thankfully most of the scenarios I've chosen are Infantry only so negating any requirement to bring along the British, Soviet and German AFVs.

The tourney list is already out and I've done a preliminary pick and choose, using the ranking choice 1,2,3 and X (discard):

1. AP08 A Bloody Harvest -Board 43 - From the original Action pack, I've played this a few times over the years, so it's a solid and dependable choice. The errata exchanging the original two Polish LMGs for Assault Fire makes this scenario just that little bit tougher on the Polish player (eliminating 2 potential fire lanes), but it's a good scenario all the same.

2. G40 Will to Fight...Eradicated - Board 12 - You can never go wrong selecting one of the original WCW pack as your #3 pick. The only reason I'm not putting this at #1 is because I have played it several times previously and I don't want to involuntarily shark a lesser experienced player.
Edit: Who am I trying to kid? I have Buckley's Chance of winning Malaya Madness, even if I start approaching ASLOK XXV levels of Snakey Pete-itis. See my thoughts on Tettau's Attack as to why this got bumped to #2. The lesser experienced players will probably roll me anyway, given the quality of their analyses that I've seen so far. They grok ASL already.

Downside to this scenario is the amount of SSR defined terrain changes and overlays. If i knew how to print out a decent copy from VASL I'd do it that way.

3. A33/107 Tettau's Attack - Board 17 - Originally part of the Market-Garden linked scenario series from the 1991 Annual, I've not played this one before in it's current form so it will be interesting to see how it plays out  with the revisions.
Edit: It would seem there are no revisions apart from a general tidying up of the wording. It's freaking 11 turns long! This scenario length is not so much about the VCs as it is a design decision predicated by the scenario being part of a linked mini-campaign where campaign VPs are awarded on the basis of how quickly the scenario VCs are accumulated. In a stand alone situation, the scenario length is overkill. Not a good one to start with after the plane flight.

Can we say Concealed Assault Move after Concealed Assault Move on the German's part along with a mass deployment for the HS blitz? I thought so. Three Exit VPs, even on board 17, is just laughable in 11 turns. There just aren't enough mid strength fire lane capable weapons to block a HS AM wave. So bidding for the Germans in this. This goes down to #3 as of right now and I would even contemplate G46 instead.

Finally, it's Board 17. I only own the Map Bundle version and that has never been, nor will it ever be folded. Therefore it fails my Air-Transportable selection criteria, unless some nice perosn has a copy of board 17 at the venue.

X. G46 Triumph Atop Taraldsvikfjell - I seem to have lost my copy of this one, but IIRC it was one of those Alpine Hill, snow and drifts things that really is too much work in the first round of a tourney. In any case, I don't recall it as a must play as it has never featured on my to play list at any point. Secondly, it's one of the G series which apart from a few stellar examples are all too reflective of thye time period they were designed in and don't really fit the current ASL meta.

1. A32 Zon with the Wind - Board 24 - The starting Market Garden series scenario from the 1991 Annual, this is another I either haven't played before or it's been 20+ years since I last played it. Board 24 is one of those boards you either hate or love. I hate it, but the scenario is worthwhile.

2. J103 Lenin's Sons - Board 42 - A personal favourite from Le Franc Tireur, republished in Journal Seven and a perennial default scenario. It's a Xavier Vitry Ost front design, what could possibly go wrong? Of course, that presumes that I am not one of the people playing said scenario.

3. RB3 Bread Factory #2 - I had to include this as I promised George I would bring a few copies of the mapsheet specifically for this scenario. It can be dicey, but it's a lot of fun.

X. A89 First Day at Diadem - Oh look a scenario featuring board 9 and from the 1995 ASL annual. Pass. 18 years of scenario design experience has left many of the scenarios from that era in the wake and I really can't be bothered checking whether this was one of the scenarios that needed errata, not when there are three solid alternates.

Here's where I bring out some of my favourite PTO scenarios that are excellent teaching scenarios for those just getting into Rising Sun or if Mark Humphries is agreeable, we may finally get BFP 99 Ivanovskii out of the overdue schedule pit:

SP 65 Ayo Gurkhali, SP 80 Die Gurkha Die, SP 95 Burn Gurkha Burn and SP 127 Bleed Gurkha Bleed - along with Numshigum, these are some of the best and most intense short-form ASL PTO out there.

1. J46 Strongpoint 11 - Never played this as I only obtained Journal 3 in the last 12 months and I'm yet to play through the scenarios. It looks rather cool to be fair.

2. 145 Shanghai in Flames - Boards 20 and 1 - Not played the revised version with the additional Japanese 447/LMG - It's worth a crack though

3. HC1 First Matanikau - another one I promised George I would bring the map.

X. 153 Totsugeki - If I never play Totsugeki again, I will be a happy ASLer. As formulaic and scripted through over-exposure as Gavin Take and with a very static role as the defender - no thanks.

1. J128 Opium Hill - I've played it three times in the last 6 weeks, losing once as the Japanese, winning both as Brits and Japanese. Tough on the Japanese, but a great scenario if the Japanese player is aggressive and maintains his composure. I'll be looking to play as the Japanese in this.

2. 147/J9 A Stiff Fight - When I first played this, I hated it but I'm a much better defender vs Japanese than I was back then after almost 100 games of PTO in the last 3 years. I will be interested to see what changes have been made. (hmm supposedly no changes made in the Rising Sun version - in which case I would rather chew my own arm off than play this three-legged canine again, unless someone is nice (read naive) enough to give me the Japanese.)

3. J71 TOMFORCE - I don't own Journal Four, the one Journal I never managed to get hold of, so this will be a completely new scenario to me as it pre-dates my PTO interest. Given that I am shocking at grokking a scenario at first sight, this could be a real curveball for me.

Edit: I just had a look at this and I pity any newbie who ends up taking the Brits in this.
A) It's a Markuss/Carter design, which means it's all about knowing the UK vehicle Chapter H notes  backwards and it's fiddly and ,
B) it doesn't just involve Carriers, it involves the IP (India Pattern) wheeled carriers, an even more esoteric subset of a complex vehicle type as it is. Moved to last position because of this and because J11 is ruled out because of the Deluxe logistics issue.

X. J11 In The Old Tradition - This was a blast to play, but it is Deluxe, and given the expected number of newbies attending, I doubt they will have the necessary boards to play, while I am not going to be able to fit Deluxe boards in my luggage given how much I will already be taking with me.

Boy, what a tough round, the only one I want to play is Opium Hill. Nice if I get it but I am not looking forward to playing either of the alternatives.

This is where I will be looking to play someone I have not played online, via PBeM or face to face before. It may mean dealing with a Rising Sun scenario, but I'd prefer to try out something from Rally Point 8 (the PTO edition), WO13 or from the new Friendly Fire pack. Something short and vicious with a couple of Tin Cans may well do.

1. J116 Brigade Hill - Small, vicious and with counterattack opportunities for both sides. Yet to win a game of this, but if I was in the running for a placing, I'd be looking to play this, probably as the Brits.

2. AP68 Odd Angry Shot - not played, but has some interesting SSRs putting limits on Australian movement.

3. A111 Cattern's Position - not played, again some interesting SSRs affecting the Japanese ability to manoeuvre, the set-up looks to be all important for the Japanese player in this one.

X. 99 Probing Layforce - another redo of an early Annual scenario (A43 in this case) and set in Crete rather than the PTO. Not that interested, particularly with OBA featuring and the Matilda basically being impervious to anything other than Close Combat.
Posted by Peter at 3:34 PM